Developed by Apple Inc. in 2014 for building scalable apps on iOS, iPad, macOS, tvOS and Linux, Swift is an open-source multi-paradigm programming language, with a simple and compact syntax, more famously known as the “Objective-C without the C”. Swift is basically a combination of power type interference with an expressive syntax to enable easy code readability and usability. With the introduction of Swift, a fast and safe language became available for the iOS platform consisting of modern features including protocols, closures, generics, optionals and type inference, ensuring app security and safety while making it easier and more flexible to use in comparison to Objective-C

Swift has undergone various upgrades; the current version at the time of this writing, Swift 5.1, was released in 2019. This version increases the stability of the application binary interface (ABI) on Apple platforms, enhancing module stability and binary compatibility to create frameworks which will enable apps to be compatible with all future versions of Swift.

The aim of creating Swift was straightforward; to make programming easy by removing the complexities from coding. Swift is a modern language where developers have the ability to write fewer lines of code while maintaining performance and efficiency similar to that of C++.

Many distinguished tech companies are now moving towards Swift. LinkedIn, a professional social network, now uses Swift in their mobile app. Lyft, a ride-sharing app, has also moved towards Swift for their native iOS app development. Companies like Yahoo, WordPress and Firefox are also choosing Swift over Objective-C for their development.

Swift has many key benefits giving it an edge over other iOS programming languages: 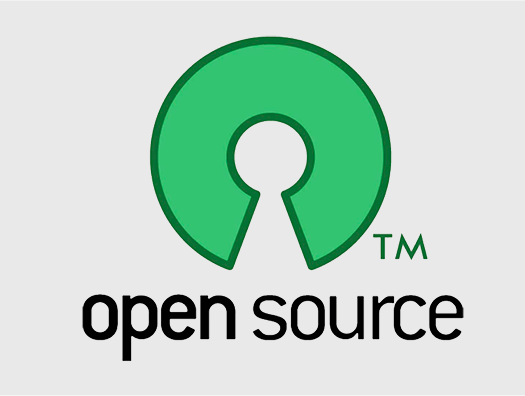 As of 2015, Swift is an open-source programming language and is available for download on Github. Given its open-source nature, it allows for developers to suggest enhancements, contribute to new features and fix bugs.

The Swift community encourages developers all around the world, green and experienced, to contribute to its source code in order to make it more feature-rich and efficient. This involves answering questions on the forums, highlighting ways of making the language more useful, and reporting any bugs that need to be fixed. Find out more on contribution guidelines here: https://swift.org/contributing/ 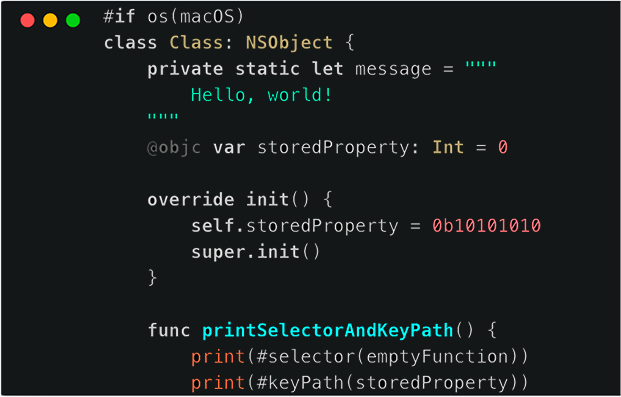 Considered a programming language which reads more like normal English, Swift is easy to read, write and edit, having a clean and simple syntax. With Swift, fewer lines of code are required to create the application as compared to Objective C, saving developers the hassle of adding conventions like semicolons, end lines and parenthesis. The readability of the language also gives developers with expertise in other languages such as JavaScript, Java, Python and C# the ability to learn and use Swift without too much trouble. 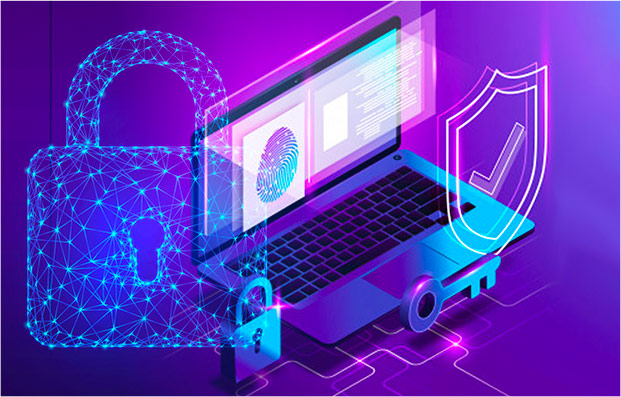 With its feature of automatic memory management (ARC), Swift enables runtime safety to prevent errors during development by enabling initialisation of variables and ensuring access to memory. ARC also aims to reduce memory and increase the performance of the app. On the other hand, Swift rejects conflicting memory access, focusing on removing unsafe and unstable code to ensure a smooth development process. Furthermore, Swift can compile errors to flag bad code, making it efficient to write and test.

There is no “nil” value in Swift objects; Swift generates a runtime crash whenever nil value is used, urging developers to fix the error immediately. However, for instances where “nil” is an appropriate value, Swift has an optional feature which allows developers to use nil using the appropriate Swift syntax. 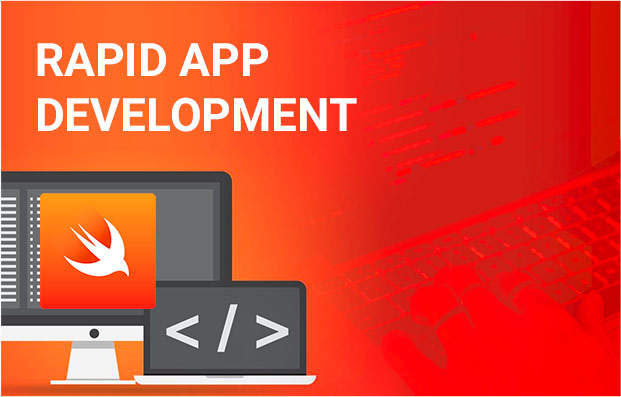 Designed to operate at a fast pace with a concise syntax and using the LLVM compiler technology, Swift really does live up to its name, by enabling code execution to be 2.6x faster than Objective-C and up to 8.4x faster than Python 2.7. Swift also has a short error feedback loop because errors can be seen and fixed during the development process before compilation. 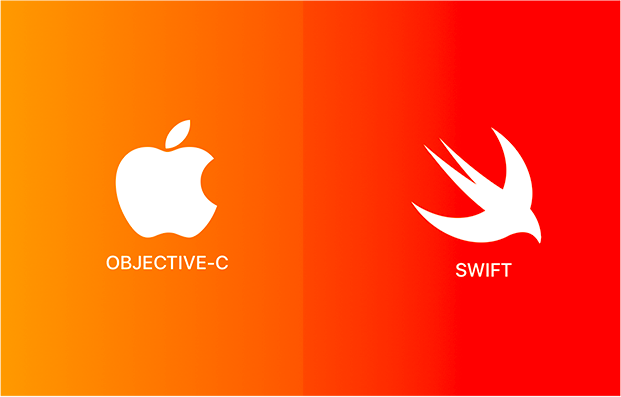 On Cocoa Touch, Objective-C and Swift can be used together, creating mixed-language apps. For developers, this becomes convenient especially when updating and modifying existing projects; they do not have to create an app from scratch, but can migrate an Objective-C codebase and then add to it with Swift’s syntax, saving a lot of time as compared to needing to completely rewrite it. 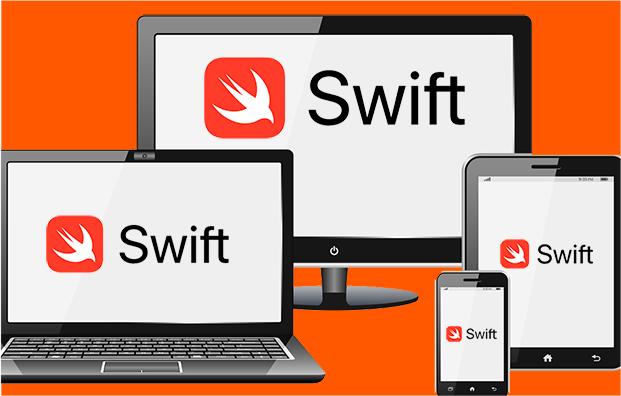 Swift in Comparison with Objective-C

While Objective-C has been around for a long time when compared to Swift, developers are now preferring to use Swift for iOS development because of its code readability and clean syntax. Without updating the C language, Objective-C cannot be upgraded to a newer version. On the other hand, Swift does not depend on any language for any sort of upgrade which permits easier upgrades to the core language itself. Additionally, Objective-C has a two-file requirement to improve code efficiency while Swift eliminates this requirement by combining them into a single file. Swift compiles and carries out bug fixes during the compilation process which allows for a shorter testing process, a feature that Objective-C have.

With features like inline support for manipulating text strings and data, Swift in comparison with Objective-C has become a programming language less prone to errors and mistakes. Furthermore, to combine two strings, Objective-C has a proper combination structure making it time-consuming but with Swift, you just need to add the “+” sign to join two strings.

While Swift has its obvious advantages over Objective-C, it should be noted that most of the essential features of Swift are derived from Objective-C, including the power of the dynamic object model.

Searching for an expert to build your app on the iOS platform? Look no further!

Preferring Swift as the main language for iOS development, we create high performance apps with an engaging experience for your users. We recognize that as your business goes digital, your customers do too. Using our senior UI designers to create a theme and user interface that resonates with your brand, we guarantee to build an app ensuring user engagement and business growth.

Winterwind’s aim is to provide a unique experience to our customers. Our Swift development team has in-depth expertise to build apps for the iOS platform, ranging from simple, small-sized apps to complex ones. Our app development strategy is based on providing a refreshing and interactive user experience while also emphasizing on security, compatibility and performance.

Apps that we develop using Swift, are compatible with all Apple machines as well Linux and Windows devices. Having extensive expertise in Objective-C and Swift development, Xcode IDE, UI/UX development and spatial reasoning, our developer team enables us to give your customers a satisfying experience on the iOS platform. We focus on keeping our technical knowledge up to date by updating our skills along with Apple’s updates. Our team’s portfolio speaks for itself; we have worked on apps of various levels of complexity, for organizations around the world. 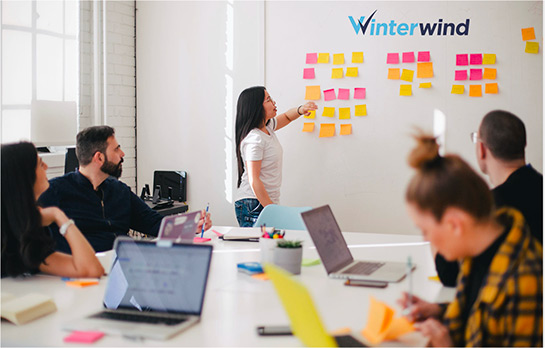 At Winterwind, the start to finish app development process is standardized and clearly defined while also recognizing the fact that every app comes with its own sets of requirements. All Swift development projects commence with an understanding of your business, your goals and how your app aligns to them. We brainstorm first and formulate the best solution tailor-made to suit your business requirements. Wireframes are created to get your feedback and set us up to create a UI design that will fall in love with. After approval of the wireframes and subsequent mockups by our senior UI designer, we work on the app development, conducting quality assurance at every stage to ensure that the app is free from bugs.

After the development process is complete, the QA team carries out comprehensive testing to ensure that the app is functioning as expected. Once the app is successfully deployed to the App Store, you can contact us anytime for issues that you encounter, for changes you want to make to the app or to develop new features. We provide long-term support, ensuring that any technical issues that occur post-deployment are addressed promptly.

Slim & Skinny can automatically adjust your photos to give your face and body the best shape possible. You will have a perfect figure instantly to show to your friends abd family.

Body Slimming Makeup Editor, with a rating of 4.6 on the App Store and compatible with both iPhone and iPad, was created with an interface in line with the brand's identity. The app is designed to detect and slim the user’s head, face and body, remove double chins, create before and after comparisons, and save creations to photo albums to share with your contacts.

To know more about the app, visit the link: https://apps.apple.com/ph/app/body-slimming-makeup-editor/id928747806

Focus timer enhances your “real focus time” and is a simple and powerful focus management tool to measure and enhance your focus. This app is best suited for people who study or work and need to improve their focus in order to achieve better results in their personal, collegiate or professional life.

Considered the #1 Productivity App for 120 weeks in a row in Korea, Focus Timer was created by Winterwind using the Swift language. Focus timer is compatible with iPhones and provides an interface that accurately shows a user’s daily time consumption, enabling them to set goals and review their focus history. Built with various features including focus dashboard, focus modes, focus and break alarms, daily and weekly charts, history and goals, the app is high performing and utilizes minimal device memory.

Have a unique idea for your app? Get in touch with the team at Winterwind today.