EOS Stays on Top in April

The Chinese Public Blockchain Index ranks Bitcoin as 14th in place while EOS stays on top. In every two months period, an evaluation on blockchain technologies is being performed to determine the quality of each chain according to these three aspects; basic technology, application and innovation. This implementation (since 2018) is organized by CCID Blockchain Research Institute and facilitated by many other technology firms in the country for cyber space security and blockchain ecological union.

The evaluation took place on April 10, 2020 and ranked 37 well-known public chains in Blockchain space. This includes EOS, TRON and ETHEREUM as the top three and are considered the biggest dapp platforms in the world followed by 11 more chains placing Bitcoin in rank 14th. The 17th assessment official result was released on April 13, 2020.

What keeps EOS on top?

According to the evaluation result, EOS ranks as the best performing blockchain project generating an assessment score of 21.4 points on applicability which slipped down a bit against Ethereum, and 29.1 points on creativity where Bitcoin has the highest points of 42.4. But EOS dominated TRON and other 35 chains gathering 105.6 points in basic technology criteria with an overall total index points of 156.1. 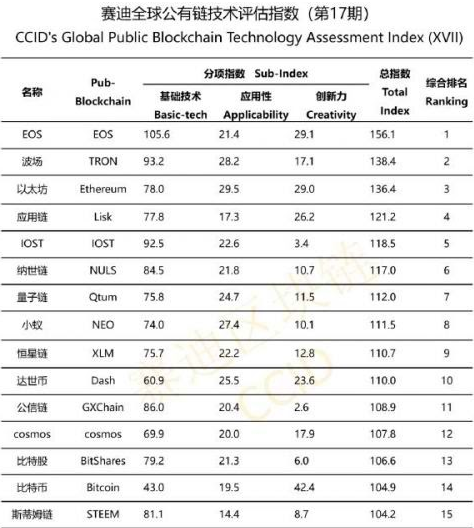 What is the basis of these criteria?

According to CCID website, these three main aspects of assessment evaluates the importance of the following;

Fill out the form below and receive a reply within 24 hours.
Les leaders du développement Laravel Winterwind Inc.